After some eventful flights, including a night in Lisbon as a bonus surprise, I arrived in Natal for ENSL (and more specifically for Fórum GNOME) on Wednesday, and was welcomed by Gustavo, Pablo & Rafael, and immediately we went to a restaurant to eat delicious shrimps.

I already gave three names, there should be many more, as everybody has been really nice, this is a very friendly and open community, and I enjoyed many discussions, with so many of them mentioning Lucas, friend, student, nice guy in general, at times it felt like a "everybody loves Lucas Rocha" meme was going on :) 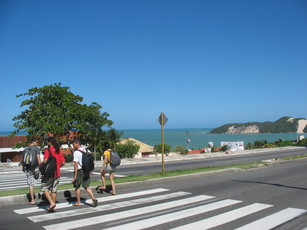 Walking down to the conference, Natal, November 6th 2010

Speaking about the conference, I had two talks; the first talk was about GNOME 3, gnome shell, and more, I have mixed feelings about this one, as I often got stopping midsentence as I suddenly remembered Everaldo had to translate it... But there were questions, and I had many discussions about GNOME 3 afterwards. More on this later.

The second talk was "GNOME on the internet", it was much better in my opinion, I learned from the previous day and added more text to the slides (and I have to thanks Cornelius and Vincent for the part about the Franklin Street Statement), there was basically two parts to that talk, the first one was how we already integrate with the internet, protocols and web services, and how we could do it even better, the second part was about going for free web services, whether it's something we want to do, and how we could make it happen (and how it's already happening with snowy, of course). 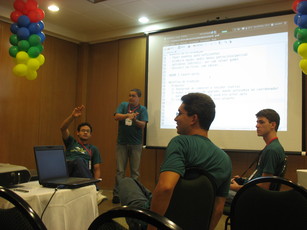 There were also some opportunities for hacking, and Vinicius Depizzol and Lincoln Sousa got working on the translation workflow for the possibly future gnome.org website, that will be very nice; on my side I started hacking on jhbuild improvements to make it easier to take advantage of distribution packages, with the overall goal of making it faster to get a development environment; this is a job to continue at the doc & devtools hackfest in Berlin next month…

I have many things to write down now, about GNOME 3 and "classic GNOME", design & mockups, local user communities, and more, I hope I can get this done soon. 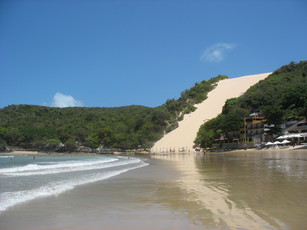 I'll now go back and enjoy the beach, but before that I really want to thank the GNOME Foundation for sponsoring both the event and my travel, this is really an acknowledgment of the importance of the Brazilian community, and that I am kind of doing a few useful things :) Thanks.

And everybody, go and become a friend of GNOME!