The date came late, and it was definitely not at the best time wrt some projets at work, but I decided to go nevertheless, and have to give my thanks to the GNOME Foundation, and the travel committee, for quickly accepting when I asked for sponsorship.

Probably because of the short notice it felt like some important teams didn't have enough representation, and while this gave ample place for some topics (building gnome!) I wish we had enough teams for a roundup of the different aspects of GNOME. On the positive side this wide cooperation is happening in the mailing list discussion on freezes, with translators, documentation team, release team and other interested parties.

Still, back to Montreal and the summit, I spent much of the first day testing and reviewing jhbuild patches, and wrapping the day with the presentation of Baserock by Lars Wirzenius. The second day was more diverse, and more intense, with (I heard) a very interesting discussion on GNOME strategy (Tiffany wrote about it in details) that happened at the same time as a jhbuild (and more) session lead by Colin, and later in the afternoon a good serie of questions asked by Xan about our (lack of a clear) developer platform. 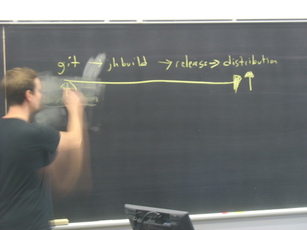 And the Collabora party, of course.

Then on Monday, more patch reviews, including (at last) Bug 654872 - Delete no longer shipped files at install time but the day was short as many people had to leave early, so it ended with random hacking and bug filing, with the good luck of hitting a bug in glib-networking with Nicolas Dufresne sitting just behind.

All in all this was my first summit and it went well, it would sure benefit from some earlier planning (both dates, and sessions), but this was a nice chance to see new heads (and known heads, of course), especially as I was not in Berlin this summer.