It's already the last day of the winter documentation hackfest in Norwich (pronounced like Porridge), tomorrow we'll drive to Brussels, for FOSDEM, and here comes a second report of my activities.

On Tuesday, after the work on git stable updates (see last post), I concentrated on various speed improvements, including a small change to our own local configuration that makes wonder (it had an hack to use XSL files from a local yelp-xsl copy but that broke some timestamping, and caused some modules to be rebuilt endlessly). In normal operation a full build of help.gnome.org is now about ten minutes.

Kat had made a request to have application icons displayed in the index pages, as they are now included in Mallard documentation titles. I started that on Wednesday and it went easier than expected, the pages indeed look nicer now.

The other important part of Wednesday was a request from Petr, to get the getting started pages integrated on the web site. The particular thing about the gnome-getting-started-docs module is that it installs pages to an existing document (gnome-help), making use of Mallard generated indexes and links to provide an integrated document. Unfortunately that operation mode didn't go well with the code, as it handled tarballs one after the other and was rather confused when another document with the same name, but no index page, came in. It required quite a lot of changes, and I'm not happy about all of them as there's quite a bit of code duplication and some hardcoded parts, but at the end of the day it was working, and you can now go and view the Getting Started material on the web site. 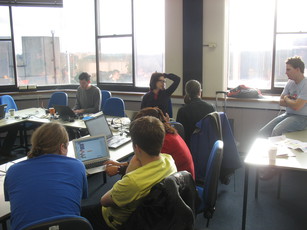 For the last day I switched to the developer docs, and as I looked at Allan's notes and thought about a way forward, I went back to the code and discovered I added the possibility to import documentation from wiki pages almost three years ago, during the 3.0 hackfest in Bangalore... It seemed like a good fit for the serie of "How Do I" pages mostly created by Ryan and Matthias so I refreshed the code and voila! the pages got on the Guides page.

During the last year or so many elements were removed from the frontpage, first the platform grid, then the "10 minutes tutorial" carousel, but that left the page quite empty. To wrap up the week, I have now used that extra space to provide direct access to more of the internal indexes.

And that's what I did during the hackfest. I already gave thanks but here they are again, Kat & Dave, the UEA, the foundation, the participants and visitors.