This is hackfest week, it's been a long time. I arrived in Norwich Saturday evening, after almost three hours in London Liverpool Street Station looking at trains being announced delayed, then cancelled, one after the other. Storms, trees, and powerlines do not mix well.

As there's FOSDEM next weekend, the hackfest was set to start on the Sunday, and it was well spent, triaging and fixing developer.gnome.org and help.gnome.org bugs, I forgot to take note of the number of bugs when I started, but each module got down to below 20. And what's especially nice is that many of the bugs I reassigned to other modules quickly got fixed (Dave at the hackfest handled them for gnome-devel-docs).

On Monday we got to the UEA School of Computing Sciences (thanks for having us), and I started the day presenting the code running both websites to Martin Packman. Then I went on adding support for the no-lc-dist flag that had been added to yelp-tools. It's a new feature that has not yet been advertised because using it meant translations wouldn't work on help.gnome.org. But that's over and modules can start using it, it will mean smaller tarballs and faster 'make distcheck', as only the .po file will have to be added to the tarballs. 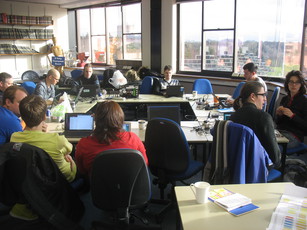 Later that day I took a detour from documentation to ponder some health check for GNOME applications, I copied some metrics from Andre's "Indicators for Missing Maintainership in Collaborative Open Source Projects" paper, and wrote some code to aggregate data from jhbuild modulesets, doap files, and git logs. I pushed my work-in-progress to people.gnome.org/~fpeters/health/.

And here we are on Tuesday, and feature of the day is the possibility to have stable documents directly updated from git branches. This is nice for the documentation team as that won't require maintainers to publish new tarballs to get documentation changes on the websites, and for the same reason it will also be great for translators. It has become quite more useful to continue on translating documentation even after scheduled GNOME releases.

This is all technical stuff but an hackfest is not limited to that, and thanks to Kat and Dave for organizing it (and the hosting, and the breakfasts, many thanks), other participants, and the GNOME foundation for its sponsorship, it's been great days, and surely the remaining days will be as productive. And then it will be back to Brussels, and FOSDEM...